Gord at a book signing at the 2014 AMO conference.

Gord at a book signing at the 2014 AMO conference. 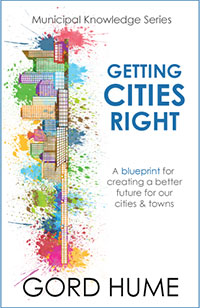 A blueprint for creating a better future for our cities & towns

There are two great tectonic shifts happening in government right now – first, a very different and difficult political climate; and second, a vast technology revolution that is changing jobs, business, lives and municipalities.

Getting Cities Right offers a bold and intrepid look at the current political environment globally, and how that impacts local governments.  And, it shares a thoughtful and challenging analysis of the new technology that is changing how we live and work – and how municipalities will do business.

Getting Cities Right is about the future of local government in the face of these challenges.  It is about creating modern urban centres that will flourish by embracing innovation, technology, and a more global perspective.  It is about getting cities right.

It is being called the most powerful book that Gord has written.

From Artificial Intelligence, to the Internet of Things, to Sentient Tools, to Robots and Bots, this exciting new book offers readers a heady picture of the changes that are coming. These opportunities are contrasted against the stark reality of how city halls and municipalities have been operated and managed in the past, and against global political uncertainties that loom large.

“This is the question hanging over every election in the western world right now … Have common sense and good taste been trumped by bombast, bullying, and bizarre behaviour?  Are we now living in a media and political world of ‘alternative facts’ and ‘post-truth’? …  In this nasty and brutish atmosphere, many believe that mayors are now the most pragmatic and innovative leaders, and productive municipal councils the most effective elected bodies.”

This is the time to question the traditional rules of how our towns and cities have been financed, governed, and operated. Highlighting weakness in everything from the property tax system to local government’s legislative powers, the book argues that cities can be the new leaders in innovation and creative ideas – but need to have more authority if they are to thrive.

In-depth interviews with four leading mayors from around the world are a highlight of this must-read book.  These political veterans share their unique insights and strong beliefs about improving local government.  While their comments are blunt and sometimes controversial, they will provide readers with dramatic insight.

“The importance of cities has never been more apparent; the problems confronting cities never more serious; and the opportunities for urban success never more possible.”

Getting Cities Right.  A powerful new book that is a must-read for everyone interested in municipalities, community, government and building better cities.

Here are just a few provocative quotes from this fascinating new book:

Gord Hume knows about cities. The former London city councilor for has spent much of his professional career engaged with municipal issues of both the theoretical and practical variety. Hume brings his knowledge to bear in his latest book – Getting Cities Right – which takes an expansive look at the issues and opportunities faced by municipal leaders in the 21st century. Chapter by chapter, the author makes his case, to wit, that “the continued evolution and success or failure of our cities is going to be the most signifi cant political, cultural, social, environmental and economic trend of the foreseeable future”. Consequently, he reasons, it’s of paramount importance that leaders and citizens stay informed of challenges pressing cities in areas like demography, infrastructure modernization and maintenance, political representation, and economic policy. Getting Cities Right addresses these topics in-depth, off ering readers a wealth of information gleaned from research, experience, and consultation with a panel of mayors from cities located in diff erent parts of the world. The result is a lucidly written document about proper stewardship of cities in the 21st century, and how it is achieved. (Be sure to check out the interview with Gord in the news section of this month’s SCENE. – ed.)