If China needed a coming-out party for the world, the Olympics provided the stage and opportunity, and China hit a home run.

The simple truth is the world cannot ignore China—politically, economically, socially, even now athletically. Its size and power are simply immense. About one in five people in the world live in China today…add India, and it’s one in three. Asia is becoming the new world power and that’s a hard concept for western minds to grasp.

This is the fifth and final segment in the series about China and Asia that The Londoner has asked me to do, and I’m grateful to Phil McLeod for the opportunity. The reaction from you readers has been extraordinary, and I thank you for the comments.

I am not naive enough to think that I have become an expert on China or Asia by spending some time there, but it is an eye-opening experience and that’s what I’ve been trying to explain in this series of articles. Too often I find that reality is filtered through some rather closed western media minds.

The Chinese army is 2.3 million people. They had a million volunteers for the Olympics. In the next few years, between 100 and 200 million people will move from rural China into the cities, and China already has a hundred cities with more than one million people living in them. Xi’an, a second-tier city because it has only 8 million residents, has 45 universities—all with more than 10,000 students.

I list these numbers simply to make the point that you have to grasp the magnitude of the Chinese economy, population and impact. You truly have to understand the size.

China has accomplished the greatest economic miracle in the world’s history over the past 30 years. There is no dispute over that. But there are some challenges facing this country as well. Growth is projected to slow from 10-12% annually to 8-9%. The cost of producing goods is rising (labour, raw materials, energy) so China’s role as a low-cost supplier is being threatened, and companies are now looking at moving some production to Cambodia and Bangladesh.

China has moved from poverty to prosperity for a large segment of its population; I suspect its biggest challenge now is to raise the quality of life for rural residents and the urban poor. More massive infrastructure projects are ahead. The environment is increasingly an issue, especially for young Chinese.

There are some brilliant—and extremely rich—entrepreneurs in China, but the mid-management level is not as skilled. People seem to be very siloed as opposed to cross-functional training and problem solving. For example, in a retail store one person shows you the merchandise, another carries it to the cash, another handles the cash, another wraps it. In hotels, the level of service is extraordinary—staff help you push the elevator button.

There are enormous economic opportunities for Canadian business, but we seem to be curiously absent. It takes time and effort to develop relationships with Asian business and government officials. If London is serious about expanding its economic diversity and strength, we are going to have to play on a larger stage. LEDC understands this, but London Council doesn’t. The Council’s decision not to have a representative visit Nanjing, our sister city, was an opportunity lost.

In hotel lobbies and bars, I routinely heard German, Arabic, French, eastern European, Hindi and other languages doing business. Yes there was English too, but one can’t help but feel that other countries are eating our lunch over there.

We will also have to learn better how to do business their way, how to adapt to their culture, and how to respect their political and social systems. In long talks with some very smart people over there, I concluded there was an overwhelming desire by the people for increased prosperity, but little for democracy (as the western world practices it).

It was an interesting experience one night, going to a nice restaurant and our little group being the only foreigners there. Menu in Chinese, staff Chinese speaking. We managed through pointing at pictures in the menu and some very bad pantomiming to order a great dinner, highlighted by a fish course I had asked for. A moment later the head waiter appeared with a plastic bag and a fish flopping in it, asking if it was suitable. (I think that’s what he was asking). Twelve minutes later the fish reappeared at the table in a rather different form. It was delicious.

My point is, we are the ones who are going to have to adapt to do business over there. Any idealistic dream about turning China into a western-style democracy is ludicrous. We have to stop looking at them through eyes that are too often biased by our media. I grew quite impatient with the often sanctimonious preaching about the faults of China by some newspaper columnists and television pundits. 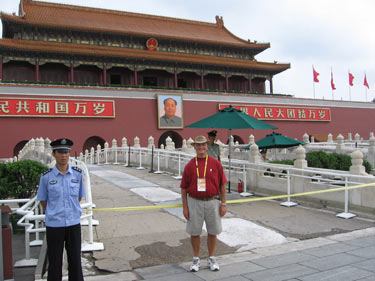 From the ping-pong diplomacy of the seventies to the Olympic ping-pong championships, it has been an amazing journey for this venerable country that has already given the world so much.

Hang on, London…hang on, Canada…the ride is just beginning and it’s going to be thrilling.